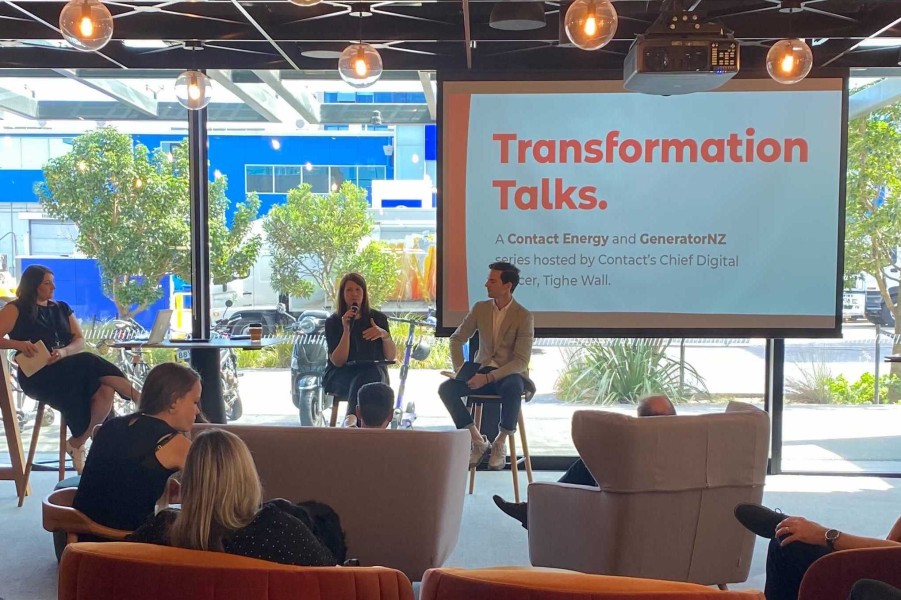 Last week we kicked off the first of the Transformation Talks, a live interview series in which speak to leaders of true transformation and innovation in New Zealand. This series is a partnership of Contact Energy and our Auckland home, The Generator NZ.

I can’t imagine a better guest for the inaugural Transformation Talk than Vic Crone, CEO of Callaghan Innovation, former MD for Xero NZ, and one-time Auckland mayoral candidate. We’re also lucky enough to have Vic on the Contact board.

Our conversation covered the state of innovation in New Zealand, megatrends Vic and the team at Callaghan are watching, the role risk plays in transformation, and how boards should evolved to most benefits their organizations.

These are my five key takeaways from the first Transformation Talk

New Zealanders are historically innovative because of geographical remoteness and the mentality to “do things on the smell of an oily rag.” (One of my favorite New Zealand expressions.) Innovation and problem solving are part of the “character and spirit” of people here, and this leads to new companies and organizations innovating on a shoe-string.

Reshuffling of NZ’s place in the world

Callaghan is anticipating a shift in global power, with a continued decline in American influence and the growing power of China and India. The pure scale China offers, and along with it massive funding options and investment in AI and machine learning, make it an increasingly important partner. Things won’t change immediately, and the US will still lead for a while yet, but sands have begun to shift.

The calculus of risk

At this stage in the discussion, Vic raised a point I was thrilled to hear. The greatest risk to incumbent businesses is the decision, rather through lack of execution or conscious avoidance, to do nothing. As the pace of change accelerates, so too should the way organizations look at and accept a degree of risk.

Another topic near and dear to me is how to harness the true potential of a corporate board and the role diversity plays in board make ups. “There’s a career path to the board room, but when they get there it doesn’t always work because the work under you is going to change immediately,” said Vic, adding that boards should include diversity of age as well as the more traditional view of the topic. “Governors hardly know anything about technology – they’re retiring in the next five years.”

The role of education in NZ’s continued success

In order for New Zealand to continue to be a shining light on the world stage, the country needs to shift its focus away from low productivity jobs through automation and toward knowledge-based roles. “Otherwise,” said Vic,” we’re staring down the barrel of an ageing population out of work.” This needs to be a drive for a holistic uplift in capability, through an increased focus on micro-credentials, helping adults transition mid-careers, and guiding parents away from traditional career orientated child development (ie, accountant, doctor, lawyer) and toward technical skills and problem solving.

Thanks very much to Vic and those who joined us for the first Transformation Talk. We’ll have the next iteration shortly in to the new year, so keep an eye out here for updates.

This was also posted on LinkedIn.

How to Reach Tighe